e reasons I chose the Kawasaki Versys was because I wanted a bike that I could take out on some of the less traveled dirt roads found all over the southwest. Over the years, I’ve passed countless dirt roads while riding my full sized touring bikes always wondering where they went.  My Harley Ultra Classic and BMW K1600 are definitely not made for travelling on gravel roads or forest service fire roads.

In the last couple of trips to California,  I spent a little bit of time trying out some easy dirt/gravel roads and I have to admit, I kind of like it.  I still go very slowly and haven’t really tried anything remotely challenging, but I’m gaining experience and getting a little more comfortable with the bike each time I turn off onto another dirt road.  I never really rode dirt bikes all that much so it’s going to take me a while to get my skills to where they need to be. 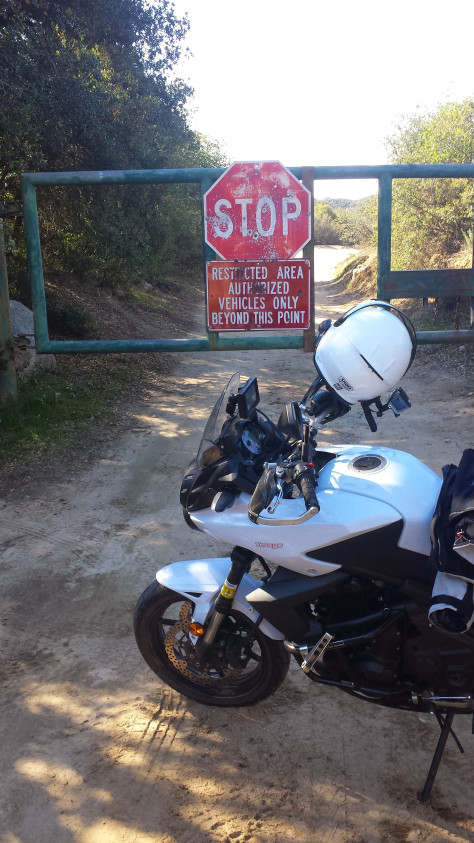 The tires on the Versys are Pirelli Scorpion Trails which are heavily biased toward street riding rather than off-road riding so I’ll be trying to avoid mud and sand for the time being.  The bike is also a bit heavy for real off-road or trail riding.   While I haven’t tipped it over yet, it’s bound to happen sooner or later and I really don’t want to have to lift it up by myself more than once or twice a day.

The gearing and power delivery seems to work pretty well for me. I can go as slow as I want to without worrying about bogging the motor.   For the most part, I’ve been staying under 30mph on the unpaved roads so first, second and third gear are all I really use.  I like the fact that I can let the rpm’s drop real low and the then rely on the torque of the motor to pull me along nice and slowly.

I’m looking forward to many more off-pavement adventures exploring the places that I’ve been unable to visit in the past.

I was looking forward to finishing up the Rt 36 ride this morning and was not disappointed.  After going back down Rt 3 to 36, I continued to Fortuna.  This part of 36 didn’t have as many of the sharp corners but instead, had nice long sweeping turns.  A great ride for sure. 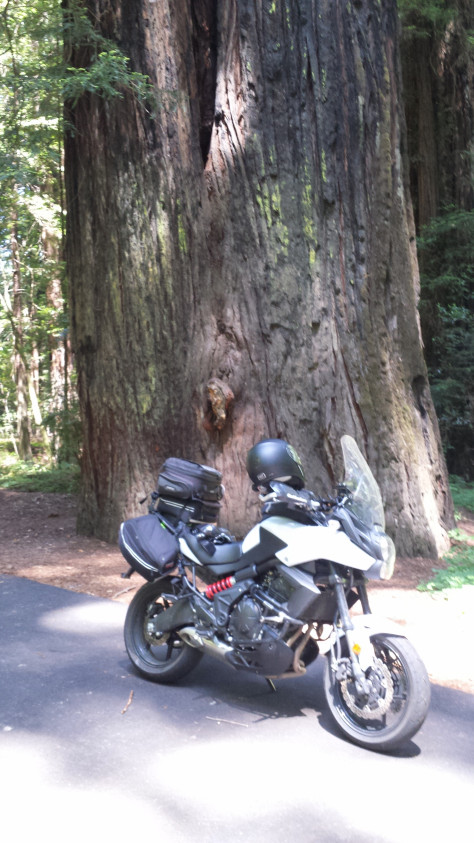 From Fortuna, I started South on US 101 and took a detour to see the Redwood trees on the Avenue of the Giants.  If you’re ever in northern California, this is a great place to visit.  I took a short hike through the forest to relax and enjoy the awesome sights.

After leaving the redwoods, I got back on to US 101 and headed toward Monterey.  Passing through Oakland was frustrating because I got there right around 5:00 and hit heavy traffic.  The Versys is much better at lane splitting that the BMW so at least that worked in my favor.  I’m still not very good a this lane splitting thing but I guess it’s something that takes practice.  I see other motorcycles zip right through but I can’t keep up with them.  I can’t imagine commuting in this kind of traffic on a daily basis.  It’s just crazy.

Once past Oakland and San Jose, the last 30 miles to Monterey was cold and foggy.  I was glad to get to the motel to warm up a bit.

Tomorrow will be the end of my ride as I expect to get to my daughter’s house in southern California.