2016 brought about some fundamental changes in my riding style.  I’ve gone from solely street riding to more of a dirt and adventure style of riding.  The pair of KTM’s that I  purchased at the beginning of the season to replace the K1600 GTL have completely transformed my riding. 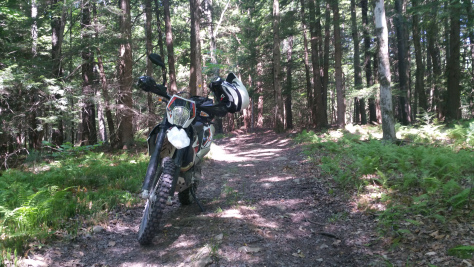 With the switch to more dirt riding, my yearly mileage has dropped considerably.  I was riding over 20K miles a year on the street but this year, I’ve only gone around 10K on the bikes.  A day out on the 690R only results in 100 miles of exhausting trail riding rather than a 300 mile leisurely cruise through multiple states.  When riding the 1190, I tend to seek out dirt roads that I was previously reluctant to explore with a big touring bike.

At some point, I’m going to need to take another cross-country trip so that I can follow some long and lonely dirt roads to remote places that I was unwilling or unable to travel to in the past.  I think I’m going to need another season of practice and experience with my dirt and off-road skills before I set off on the next big adventure.  I still have a lot to learn about choosing the right line when riding off-road and haven’t really learned how to ride in sand at all.

I’m guessing that by the summer of 2018 or 2019 I’ll be ready for the next epic ride.  Until then, I just want to avoid any serious injuries so that I can once again explore the USA on a motorcycle.  There’s no better way to see the world than on a motorcycle.