Since crashing my BMW K1600 last summer, I’ve been looking for a suitable replacement bike.  I think I’m done with big, heavy bikes for now and have been looking at mid-sized bikes that would be comfortable on day-long rides while still being agile and fun to ride.

I’ve also become a fan of off-road riding thanks to the Kawasaki Versys.  While the Versys isn’t really an off-road bike, I have taken it on some dirt roads and easy trails. It’s been a great change from street riding opening up a whole new world of riding opportunities.

So, during my last trip to California I visited a huge motorcycle dealership called Bert’s Mega Mall.  I was able to look at offerings from virtually every manufacturer all under a single roof making comparison shopping very convenient.  After spending about an hour looking around, I had narrowed it down to just a couple of bikes.

After returning home to NY and visiting a couple of local dealers to get some price quotes, I decided to go ahead and buy a KTM 1190 Adventure.  So, on a cold Saturday morning I picked up my new bike and rode it home.

I’ve only put a couple of hundred miles on it so far, and it’s still a new toy, so it’s hard to give a full and un-biased review at this time.  However, I will say that it seems to be just the kind of bike I was looking for.  The size of the bike fits me well, it has good power, good suspension, good brakes, and is a real pleasure to ride on the less-than-perfect back roads we have around here. 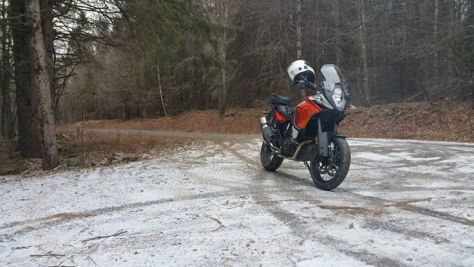 I’ve taken it on some un-maintained dirt roads in a local state park and there’s no doubt that the KTM is better on dirt roads than the Versys.  I’m not an experienced off-road rider so I really can’t pinpoint what makes it better.  I suspect that the combination of better suspension, traction control, and wheel sizes just add up to a better off road experience.  I guess that’s to be expected, after all, the KTM cost more than twice as much as the Versys.

I’m really looking forward to getting some seat time on this bike. I think I’m going to like it a lot.