Since I had such a good time riding through the Sequoia National Forest yesterday, I thought I’d go ahead and spend another day exploring the area.  So, I got started at around 8:00 am and headed towards Glennville on 155.

I was looking for a specific Forest Service road (23S16)  that is shown on the map that I have.  I rode around in circles for about an hour before finally giving up and changing my route plans.  I headed north through the forest on another Forest Service road (23S05).  Within a couple of miles, the sky started to get a bit grey and I started feeling a few sprinkles of rain start falling so I stopped and put rain covers on the soft bags and kept on going.

Near the end of this road, a guy unloading a horse from a trailer stopped me to ask about the weather.  I told him that I had run into a few sprinkles and heard some thunder.  I asked him if the horse was afraid of thunder and he replied “I don’t know, but I’m about to find out”.  He also told me that there was a nice place to visit called the Trail of 100 Giants just a few miles north of where we were.

I decided to go ahead and ride to the Trail of 100 Giants.  After parking, I got a trail guide and went for a short walk to admire the giant trees.  Even though I’ve seen these trees before, they’re always impressive.  I spent about 40 minutes admiring the tree before getting back on the bike to continue the day’s ride.

By this time, it looked like the rain storms were becoming more widespread with hardly any blue sky visible.  As I headed east toward Johnsonville, it looked like I was heading toward some heavier rain so when I saw a road that went south where the sky looked a bit better, I went that way instead.   As it turned out, the road that I found was the 23S16 road I was looking for earlier in the day. 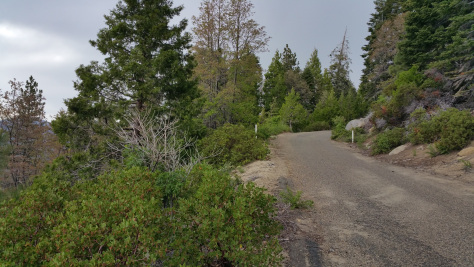 This road went through some forest that had been burned so the views weren’t as good as some of the pristine forest I’ve seen but it was still an enjoyable ride.  During the 25 or so miles I rode on this paved mountain trail, I ran through some light rain but  avoided the heavy rain that appeared to be just a couple of miles away.

As I emerged from the forest, I decided it was time to head back toward Bakersfield to find a room for the night.  As I descended out of the mountains, the air temperature rose dramatically.  By the time I got to Bakersfield, it was almost 100 degrees and I was glad to stop, get my leather jacket off, and get into a nice air-conditioned room.