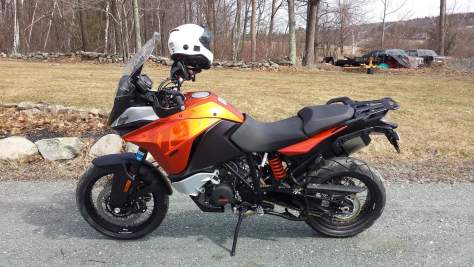 After crashing the BMW K1600 GTL in the summer of 2015, I spent the winter months considering replacement bikes.  While I enjoyed riding the K1600, I wanted something lighter and more versatile. With this in mind, I started researching adventure bikes.

In early spring of 2016 I decided that the KTM 1190 Adventure would be my next bike.  As a leftover 2015 I got a good deal on the bike and immediately took it out onto some dirt roads.

The big KTM is surprisingly good on dirt roads even with the street oriented Conti Trail Attack tires.  On the street, the KTM isn’t exactly a sport bike but it handles rough pavement and is fairly comfortable to ride.

The big V-Twin motor has plenty of power and the transmission shifts smoothly.  Suspension and brakes are top notch as you would expect from a premium European bike.  The bike doesn’t come with luggage but there’s a nice rack on the back of the bike to attach a tail bag to.  I’ll be adding some soft luggage to this bike rather than hard cases as I’d like to be able to easily move it from one bike to another.

I don’t have a lot of seat time on this bike yet and haven’t gone on any long trips but I’m confident that it will be a versatile and competent long-distance bike that will allow me to explore any road I can find.  I look forward to many new adventures.