As is typical on the coast, the weather was cool, about 55 degrees,  when I left Monterey this morning.  The skies were mostly clear with just a hint of fog rolling in off of the ocean and the smell of salt water was in the air.

I headed south on the Pacific Coast Highway going through Carmel and Big Sur.  I stopped along US 1 a number of times to take pictures because every time you go around another corner, the view changes.  It’s some of the most beautiful scenery that you’re ever see. 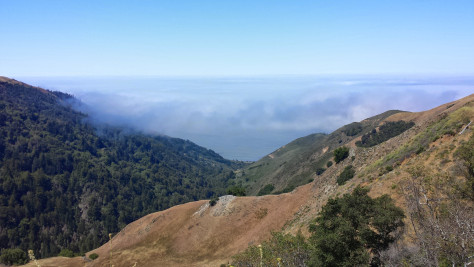 ust south of big Sur I turned off of US 1 and onto Nacimiento Fergusson Rd.  This road takes you up into some nice canyons.  The road is narrow with tight switchbacks that take you up the mountain and above the fog  giving you an incredible view of the ocean from above US 1. 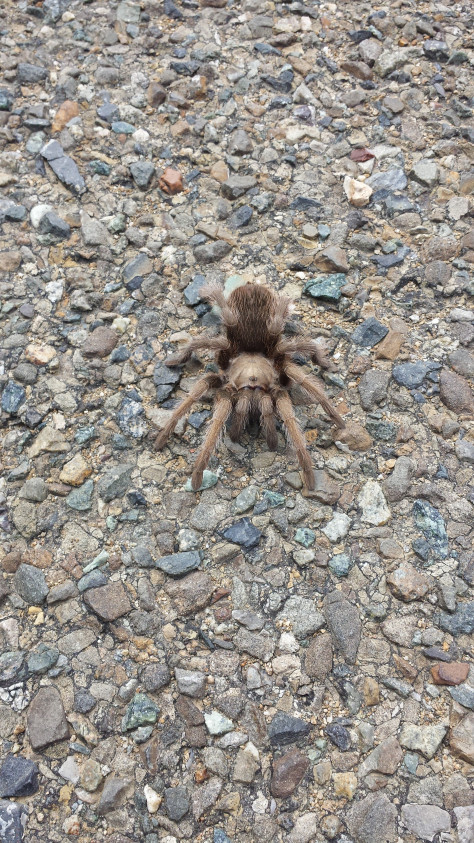 On the way up to the top of Nacimiento Fergusson Rd. I came across a tarantula walking across the road.  It didn’t seem to be in a hurry and posed for pictures.  I tried to coax it off the road but instead of turning around and running, it just reared up and got ready to attack  I decided to just leave it alone and let it take its chances crossing the road.

I rode past a number of National Forest campsites as I continued east toward Lockwood.  Eventually, the road straightened out and I started seeing lots of nondescript white vans on the road.  As it turns out, this road goes through a US Army training camp.  I’m guessing that I was being monitored because i had to drive through some devices that looked like big metal detectors.

Eventually, I ended up back on highway 101 where I headed south and then turned on to Rt.  33 toward Ojai.  The first part of this road went through some rather large Almond groves and then through some oil fields near an town named Taft.  After leaving Taft, the road started getting through some canyons and cooled off nicely.

Once I got to Ventura, I got back on to 101 and made the final run to my daughter’s house in Rancho Santa Margurita.  Of course my timing couldn’t have been worse because I spent that last 2-3 hours in heavy traffic giving me time to practice my lane splitting skills.  I probably went at least 20 miles weaving between cars trying my best not to smack my mirrors into pickup, SUV, and mini van mirrors.  I’m really not too good at this lane splitting thing so every time I saw another bike behind me, I pulled over and let them by.  I tried to follow but could never keep up.  In the end, I spend about 1.5 hours battling traffic before ending my cross country trip at about 7:30 pm.