I got a nice early start this morning and got back on to I-80 for another day of interstate riding.  The part of I-80 through Wyoming, Utah, and Nevada is quite nice with some great scenery and little traffic.

For the first couple of hours, it was a nice easy ride but as I neared Rock City WY I ran into some strong gusty winds that made the ride a bit challenging.  With the wide open spaces out here, the wind just blows across the flat land with nothing to stop it.  There was once instance where the wind wasn’t too bad but I could see a cloud of dust/dirt blowing across the road ahead.  Sure enough, as I hit that part of the road I got blasted hard by a strong cross wind.  I was ready for it so it wasn’t too bad but it was the kind of wind that will blow you right off the road if you’re unprepared.

At one of my frequent rest stops, I was on top of a mountain ridge alongside a good size wind farm.  The turbines were spinning away making nice clean, green power.

The wind only lasted for an hour or two and calmed down later in the day making for a comfortable ride.  The roads are generally straight and speed limits vary from 70-80 mph so you can really make some good time.

Somewhere in the middle of Nevada as I was getting back on the highway after getting gas, a bee hit me and ended up inside my helmet.  The odd part is that he was sitting upside down on top of the chin bar just behind my face shield.  I could see it sitting there and it appeared to be dead.  I didn’t just want to open the face shield because I figured he would just blow back into my face so I just watched him for signs of life as I looked for a chance to stop.  Within a minute, I started seeing him start moving his legs around so I made a quick emergency stop, opened the face shield and let him fall out.  Crisis averted!

After passing through Salt Lake City, I rode through the Bonneville Salt flats.  It’s quite a sight to see.  The salt goes on for miles and miles with occasional patches of water visible. 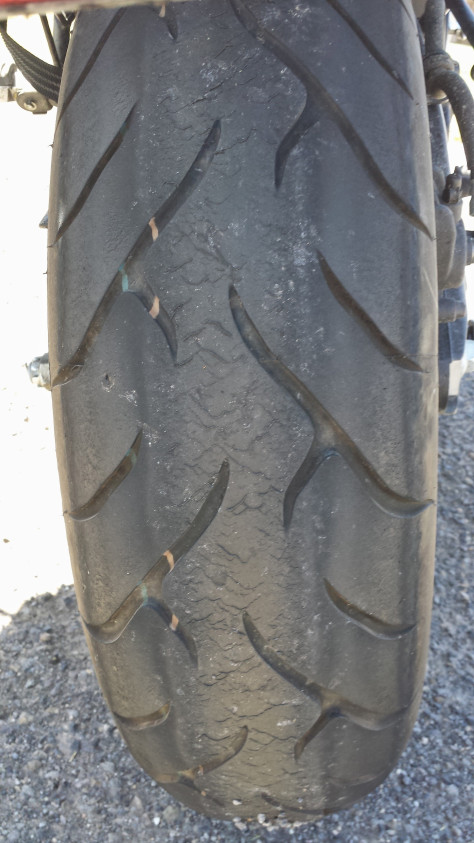 There were a couple of times today that I saw some insane tire wear on the rear tire.  It seems to be related to the road surface because sometimes it looks bad and other times, the tire looks normal.  It looks like the tire is heating up and just tearing the tread off along the center of the tire.  When I stopped at a rest area, I had to brush the gravel off because it was sticking to the center of the tire.  I’ve never seen anything like this on my other rides.  It looks like I just did a long smoky burnout.  The tread depth is now around 3/32 so the tire is just about used up at only 3,500 miles.  I’ll have to keep an eye on it to see if it’s going to make it the remaining 1,000 miles to my destination.  When I left NY, it had 6/32 of tread so it looks like it will be close.  When I get to LA, I’m going to be looking for a rear tire.  The front tire seems to be holding up fine.

It was a long day but I made good progress travelling over 700 miles.  I ended up stopping for the night about 150 miles east of Reno in a little town called Winnemucca NV.