I left a bit early again today, about 7:30,  in an effort to get some good riding in before the heat.  It wasn’t long before I saw signs announcing the White Sands National Monument and decided to stop in and take a look around.

The sand is as white as any you will find.  It’s actually quite a sight to see this bright white sand and large sand dunes out here in the middle of New Mexico.  Within the dunes, there are a number of plants/bushes that somehow find a way to survive here.  It’s really quite amazing that anything can grow here.

Riding a touring bike on roads carved out of sand was a unique experience.  There were areas that were nice and smooth and other places where the sand had become like a washboard.  Of course, the sand is a bit slippery and you need to be careful.

After riding through the park, about 5 miles or so, I headed back out onto the highway.  By this time the temperature was up to about 90 making the ride warm but not altogether uncomfortable. 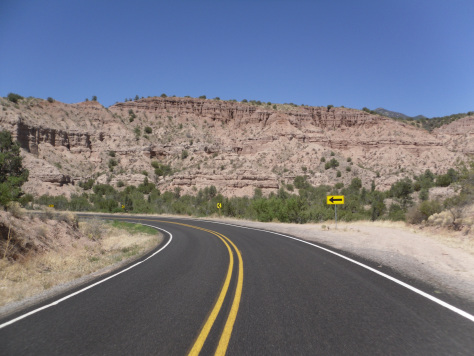 As I headed north on Rt 180, I began seeing some mountains in the distance.  After spending the past few days on long, straight highways, it was great to ride on roads with curves and some changes in elevation.

This road has nice long sweeping curves that make for great riding.  The landscape is still rather desert-like with somewhat sparse vegetation and lots of exposed rock formations.

Before leaving this morning, I was watching the news and the big story was the forest fires that had been burning in Arizona for about a week.  Cities in New Mexico had air quality warnings due to the smoke being produced from the fires.

As I got farther north, I started seeing huge clouds of smoke in the distance.  It’s hard for someone from the northeast to appreciate the size of these fires.  The Arizona fire has consumed 400,000 acres of forest and was 0% under control so it was still going strong.

As I got closer and closer to the smoke, it became more apparent just how big this fire was.  Eventually, I started driving into the smoke at which time, it went across the entire horizon leaving absolutely no sign of blue sky.

About a half hour into the smoke, I came upon a sign announcing that Rt 180 was closed near Reserve, NM causing me to stop and find an alternate route.  I ended up heading toward Gallup, NM.  I rode for almost 3 hours without seeing a single car going in the same direction that I was going and maybe 20-30 cars going in the opposite direction.

I rode through some pretty thick smoke for over 50 miles before seeing clear sky again.  Below are a couple of pictures that show what it was like. 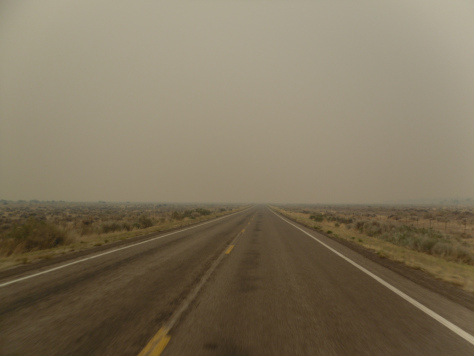 Eventually the smoke cleared and I could once again see bright sunny skies.  I ended up stopping for the night in Gallup NM.