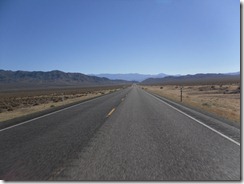 I left Reno this morning around 7:30, hopped on I80 for a few miles, and then turned on to Nevada RT 50 – America’s Loneliest Road.  RT 50 goes all the way across the center of Nevada through some very remote areas.  The road is long, straight stretches of land with small mountains visible on the left and the right side the majority of the time.   Every hour or so, I’d ride through a small town and then continue off into the desert once again.  The weather was pleasant all morning – bright blue skies and not a single cloud visible anywhere.  The landscape is essentially barren with the exception of some sage brush and other small desert bushes.  There doesn’t seem to be any real agriculture, farming, or much of anything else out here, it’s just miles and miles of road that never seems to end.

Every once in a while and generally when approaching a small town, the road would have some nice curves and either climb or descend a small mountain before once again returning to a flat straight road.  In the afternoon, it got a bit warmer but remained quite comfortable for riding.  Some clouds appeared and when the sun went behind the clouds, it became noticeably cooler for a few minutes.

This road is generally from 5,000 to 7,500 feet above sea level.  I mention this because this new bike seems to have much better power at higher altitudes than my ‘06 does.  Even with the new bike, it’s clear that high altitude robs power, but it just doesn’t seem to be as noticeable.  I don’t know if this is the 103 motor vs… the 88 inch motor or maybe the 103 has a fuel map that tolerates the altitude better. 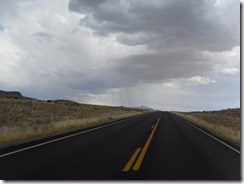 Late in the afternoon, about the time I entered into Utah, I started seeing some dark clouds on the horizon.  I could see areas where it was obviously raining but luckily, I only hit a few small spots of rain that only lasted a minute or two.  I really didn’t even get wet and the rain evaporated from the road almost instantly.   For the last 2-3 hours of the day, I kept thinking that I was going get wet but thankfully, I never ended up with more than a few raindrops on my windshield.  That means that so far, I really haven’t had to drive through enough rain to put the rain gear on.

The last stretch of today’s ride was a short trip down I70 to Salina Utah where I got a room for the night.  I hit some very strong winds on I70 that would push me from the right lane to the left lane despite leaning hard to the right to stay in my lane.  Since it was so windy, I cut the day a bit short stopping at 6:30pm for the night.

Tomorrow, I’ll head into Colorado.  I’m planning to head towards the “Million Dollar Highway” – Colorado 550 between Ouray and Silverton.