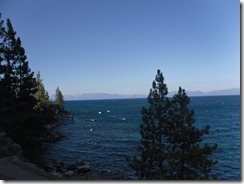 I left Lake Tahoe around 8:00 am and rode about 25 miles around the lake before heading towards Yosemite.  It was cool, around 50 degrees so I had my cold weather riding gear on.  Lake Tahoe is a big lake and from what I was told, it’s approximately 78 miles if you want to go around the whole lake.

I stopped at a gas station to get a cup of coffee and as I was walking out, a guy on a BMW tipped his bike over at the gas pump.  The bike didn’t go all the way over because it actually leaned against the pump.  He had a friend riding with him who helped pick the bike back up.

As I went down out of the mountains, I came to Carson City NV and turned on to RT 395 South.  Not too far outside of Carson City, there was a truck painting lines that I had to ride behind for a couple of miles before getting to a section of road where I could pass.  This road brought me through a number of small towns, through some flat land and then trough some mountains.  There were very few cars on this road so it was a nice pleasant ride. 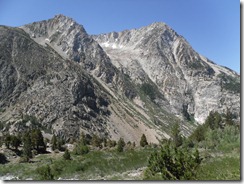 I got to Yosemite around 11:00 and waited in line for about 15 minutes to pay the entrance fee.  The Park Ranger collecting money said that there was frost on the grass early this morning and that it’s not uncommon to have frost this time of year in the high country.

The mountains here are bare granite with little vegetation growing on them.  The plant life that is present tends to be concentrated at the bottom of the mountains along the flat areas.  This contrast of green vegetation against the bare rock really makes the mountains stand out and look all the more impressive.

The bare granite cliffs appear to be a rock-climbers dream and there were plenty of people climbing or getting ready to climb various peaks.  In addition to the people parked alongside the road, there were a lot of campgrounds that appeared to be full of tourists.  Traffic was light to moderate and really wasn’t much of a problem. 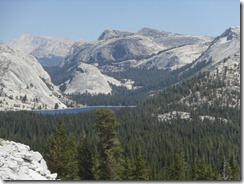 The road through the park was peaceful and scenic making for a very enjoyable ride.   This scale of these mountains is hard to appreciate unless you’re actually standing there looking up at the mountains and I found myself staring at the landscape in awe of the grandeur of the mountains.  Yosemite is certainly at the top of the list of most beautiful places in the US and I highly recommend it as a destination if you’re ever in California.

I rode around the park until around 3:00 pm and then decided that it was time to head South to my daughter Kaydee’s house.  The road out of Yosemite was not such a pleasant ride due to road construction, one lane roads, sections of dirt road, and slow moving motor homes.  It took well over an hour to go 25 miles through the winding roads to the exit of the park.

Once out of Yosemite, I headed towards Fresno and then South towards Los Angeles on I5.  By the time I got to Bakersfield, it was getting dark and the highway became more congested.  Driving into Los Angeles at night with 6 lanes of traffic in each direction became challenging.  While I didn’t run into any slow traffic, it was hard to ride with all of the lights, the reflectors dividing lanes of traffic and the 70-80mph speeds.

It got to Kaydee and Steve’s house around 11:00 and was glad to be off of of the freeways.  I’ll be spending a few days with them before heading back East again.