I left the motel around 8:30 this morning after donning my cold weather gear.  It was 53 degrees, foggy and damp so the heated handgrips and heated jacket liner made the morning ride much more comfortable. 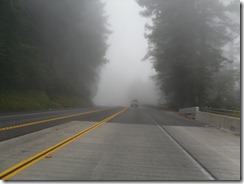 Within a few minutes of leaving, I was in California and riding through the Redwood forest.  There were varying degrees of fog going from thin fog to quite thick fog where visibility was limited to about 50 feet.  Water droplets formed on the windshield and the face shield on my helmet.  In an add sort of way, I think the fog enhanced the ride because it seemed fitting for the Redwood forest.  Of course it was cold, damp, and not the best weather for riding, but I still enjoyed it.

After  leaving the Redwoods, 101 goes back towards the ocean.  I rode down the coast  for a little while before turning East on Rt 299 towards Redding.  After a short while, I realized that I had already been on this road before.  In 2008, I also rode this same road through the Shasta Trinity National Forest.  I decided to keep going because my recollection was that the scenery is breathtaking and the road is fun to ride on.  Moving eastward away from the coast, the weather changes dramatically.  It was now warm and sunny so when I stopped for gas, I stripped off all of the extra clothing and headed back down the road.

299 follows a river through a valley between tall mountain peaks.  For the most part, the road is in good condition and there isn’t a lot of traffic to deal with.  On top of that, it has great corners that are perfect for motorcycle riding.  There was a section of the road, probably about 2 miles long, that has a great series of 25 mph corners going downhill that are perfect for scraping the highway pegs.  I’m guessing that I scraped the pegs at least 10 times as I negotiated the corners.  It takes all of your concentration too keep this up as the corners go from left to right and back to the left again.

When I got to Redding, I decided I’d head towards Lake Tahoe.  I hopped onto I5 for about 30 miles and then took Rt. 99 through Chico and continued to Yuba City where I turned East on Rt. 20.  This route brought me through an agricultural area where there were dozens or orchards beside the road.  I’m not sure what kind of trees they were but I saw walnuts and peaches. 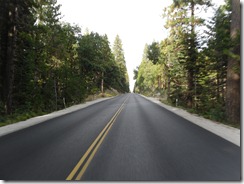 As I started back up the mountains, it got cool again so I put my jacket back on and proceeded through the Tahoe National Forest.  The road surface was completely new and was a joy to ride on.  There were very few cars on this stretch of road so it was quite a pleasant ride.  At some point, I ended up on I80 for about 30 miles to get to Lake Tahoe.  I80 is in terrible condition – some of the worst Interstate I driven on.  While the scenery is spectacular along I80, I didn’t really get a chance to take pictures because the road was so mad, I had to ride with both hands on the handlebars the whole time.  After exiting I80, it was about 12 miles to the lake. 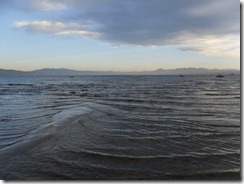 As you near Lake Tahoe, it’s obvious that this is a resort town.  The houses look like they’re fairly expensive and there are lots of motels and other tourist type places.  The motel I’m staying at tonight is a nice little place across the street from the lake.  It’s fashioned after a small cabin and has a somewhat Adirondack feel to it.  I’ll probably ride around the lake tomorrow morning before starting South towards Yosemite.