I’m sitting here tonight chewing on a slab of beef jerky and looking at the ocean as I write this update.  I have a whole pound of it to eat so I’ll probably skip dinner tonight.

It was cold when I left this morning around 8:00, only about 50 degrees, so I put on my chaps and heated jacket before heading South on Highway 101.  Before long, I ran into fog, wet roads, and then light drizzle.

Logging is obviously a big industry in the Northwest.  There were a lot of areas where all of the trees had been harvested, areas where new trees have been planted, and areas where trees were planted years ago and are being grown out to be harvested years from now.  At first, I thought it was a sad sight to see the forest cut down like this.  However, if you think of trees as just another cash crop such as corn or wheat, it’s easier to accept the fact that such large areas of forest have been cut down. 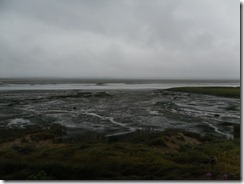 The first couple of hours, I really didn’t see the Pacific Ocean but rather a variety of small bays.  You could tell that it was low tide because for the most part, all I saw was miles of mud along the shoreline.  Many of the towns in this area appear to be small fishing towns.  From the signs on the shops, it looks like the harvest crabs, oysters, and salmon from these waters – at least that’s what they’re selling so I assume that’s what they’re catching.

Eventually, the road brought me the the ocean.  By this time, i was starting to see some dry road, the fog was lifting, and the sky was clearing.  It was still pretty cool out but at least it wasn’t quite as wet. 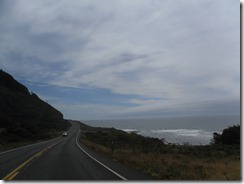 The coast line is varied and quite beautiful.  As you travel along the ocean, the elevation goes from near sea level to tall cliffs going down to sandy beaches.  The lower lying areas close to the shore are marked with Tsunami warnings showing evacuation routes to higher ground.  Every 20 miles or so you come to another small town.  Most of the houses can be best described as beach houses.

Around 12:30 I decided to stop for lunch at a place called Dory Place, a small seafood shop.  While I was waiting for my food, I went to the men’s room and found that there was another whole shop in the back.  This place was called Mr.. Bill’s Village Smokehouse.  Mr.. Bills had a variety of smoked fish and jerky.  After eating lunch, I went and bought a pound of beef jerky.  It was reasonably priced at $19.50  a pound so I got half a pound of regular jerky and another half a pound of teriyaki jerky.  This stuff is whole slabs of meat measuring 8-10 inches long by 2-3 inches wide and close to a half inch thick.  It’s probably the best beef jerky I’ve ever had. 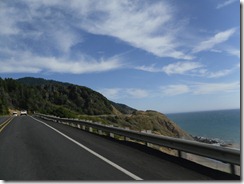 After lunch, the sun finally started coming out and it was up to 56 degrees according to the sign in front of the bank.  By this time, the roads were completely dry making the ride a bit more enjoyable.  I should have taken more pictures, but I had some opportunities to ride without motor homes, trailers, and other slow traffic in front of me.  So, rather than sightseeing and taking pictures, I enjoyed riding the twisty roads instead.  After all, I rode to the west coast to enjoy the riding so I seized the opportunity and had some fun riding for an hour or so.  By the end of the day, the temperature had risen to the mid 60’s and made for a nice afternoon.

I stopped for the night in a town called Brookings Oregon.  Tomorrow, I’ll probably continue down 101 into California and then head inland towards the mountains.