As I was getting ready to leave Missoula this morning around 9:00 am, I felt some large raindrops start falling.  The sky was cloudy but it sure didn’t looks like storm clouds so I went next door to fill up with gas.  By the time I was done getting gas, the rain had stopped.

I headed West on I90 towards the Pacific coast.  About an hour down the road, as I was riding through some mountains, the sky started looking very grey. The road was wet but it wasn’t raining so I stopped and put my chaps on in just in case it did  start to rain.   It was still a bit cool as I left the mountains and returned to flat farmland with more huge wheat fields.

There was a section of the highway where the names of the various crops were written on signs attached to the fence line.  I saw alfalfa, field corn, potatoes and Timothy.  By this time it was getting nice and warm so I stopped and took off some clothes.

About 100 miles East of Spokane, I rode into the Snoqualmie National Forest.  As I entered the forest, it cooled down quite a bit so I stopped and put some clothes back on and continued toward Spokane.  There was an awful lot of traffic along this stretch of I90 and it was moving along at 75-80 mph so it was difficult to take many pictures.

About 30 miles from Spokane, I left I90 and took another road to I5 and into Tacoma.   Tacoma traffic was a lot like driving on the freeways in California.  There were an awful lot of cars on the road for a Sunday afternoon and numerous slowdowns.  I can’t imagine how bad it must be to drive around Tacoma during rush hour traffic.  There are permanent road signs warning of slow-moving traffic so it must be a daily struggle to commute around Tacoma.

After making it through Tacoma, I got on to Route 18 for the remainder of the day and ended up in Aberdeen Washington for the night.  The last hour of riding was quite chilly.  The temperature was around 60 and the air was damp making it feel even colder. 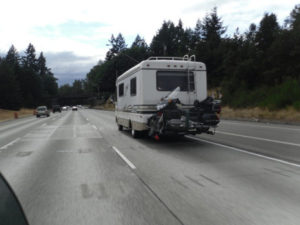 I saw an interesting way of transporting a Gold Wing this afternoon.  It looked it was a platform attached to the trailer hitch of a motor home that accommodates a big touring bike. It looked very solid and didn’t see it move around as we hit bumps in the road.  I’ve see lots of bikes on trailers this week headed for Sturgis but this one was unique.

I was glad to stop for the night tonight as this was the first day that I actually felt tired.   Tomorrow I’m going to head south down the Highway 101 along the Pacific coast.