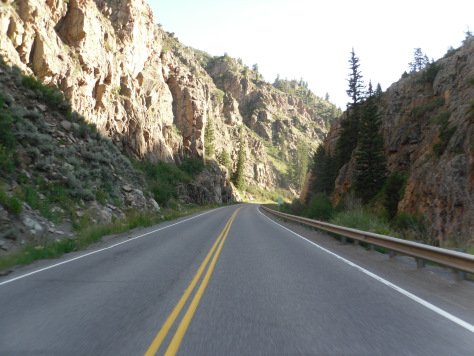 I left around 8 am this morning and headed towards Gunnison CO.  This brought me through some beautiful mountains and canyons.  The mountains were just over 10,000 feet and the canyons were nice and wide with many ranches along the way.  It was cool, about 55 this morning, but made for a comfortable ride.

From Gunnison I turned north and rode through the Gunnison National Forest and San Isabel National Forest towards Leadville.  From Leadville, I got on 0I-70 and went past Breckenridge to Idaho Springs.  I seem to get very good gas mileage when I ride in the mountains.  Notmall, I average around 40mpg but today, I got 48 mpg from the hotel to Leadville and then 52mpg from Leadville to Idaho Springs.  I’m guessing that it’s because I’m generally going slower and really don’t use much gas decending from 10,000 feet to 7,000 feet.

From Idaho Springs I picked up Rt 103 to Mt. Evans.  There was very little traffic and it was a decent road winding along the bottom of a canyon.  Mt. Evans is the highest paved road in North America peaking at a bit over 14, 000 feet above sea level.   Leaving Idaho Springs, the road rises almost 7,000 feet in about 28 miles.  The park itself has a 14 mile long road that has some very steep and tight hairpin turns that were a bit difficult to negotiate.  For many of these turns, first gear was too fast and I had to slip the clutch uphill while turning the handlebars almost to the stops.  The parts of the road that were straight had no guardrails or shoulder – just pavement and then a dropoff.  Since the road was so challenging, I got very few pictures because I had to concentrate on driving. 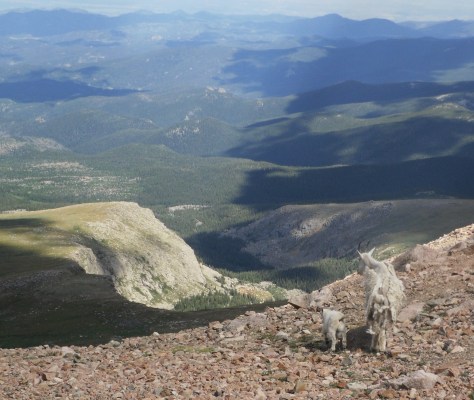 At the top, the view was spectacular.  You basically look down upon dozens of other mountain peaks giving a very unique perspective of the surrounding landscape.  Two mountain goats, a mother and her baby,  were grazing on the side of a pile of rocks atop the summit.  They seemed to be quite tolerant of people and at one point, walked casually past a group of 30 or so people about 10 feet away from them.

It was cool at the top – 48 degrees according to the Park Ranger collecting money at the entrance.  On the way up I really couldn’t see whether or not there were cars coming when going up and around the hairpinn turns.  Going down the mountain was actually quite a bit easier because you could see cars coming and could take the turns a bit wider when no one was coming the other direction.

After leaving Mt. Evans, I continued north towards Boulder and Loveland.  I stayed on backroads and rode through the Arapaho National Fores and the Roosevelt National Forest.  The ride between Central City and Boulder brought me through another canyon with steep rock cliffs.  I couldn’t take may pictures because there was a police car right behind me and while I really don’t know whether or not its legal to set the cruise control, and reach out and take photos on 40 mph winding mountain roads, I really didn’t want to find out by getting pulled over for taking pictures.  There were plenty of places to pull off the road but they all had a drop off from pavement to gravel and I really didn’t want to pull over and dump the bike so I continued on.  Plenty of cars were parked in these little pull-offs and I saw quite a few people fishing and also rock climbing up the cliffs.

I ended up catching I-25 and driving to Fort Collins where I found a room for the night.  To get home, I figure that I have about a 3 day ride from here so I’ll probably go up into Wyoming and then turn east and take the interstates most of the way back.