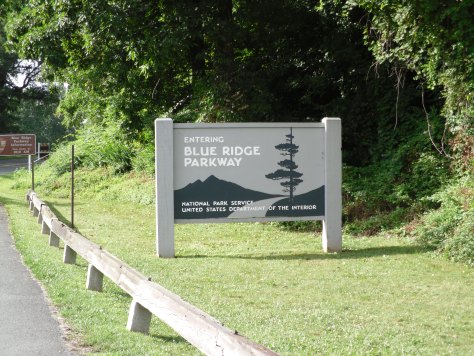 I got started around 8 am under cloudy skies.  I rode to Waynesboro, VA and started down the Blue Ridge Parkway.   The road is a simple 2 lane road that winds along the top of the mountains.  The road is in good condition and the speed limit is 45 mph.   There aren’t any tough hairpin turns or ridiculously steep grades making it a nice comfortable ride at 40-45 mph.

The scenery on this road is fabulous.  There are green mountains and valleys everywhere you look.  While the clouds often limited what could be seen, they also added to the beauty of the landscape.   There are plenty of places where you can pull off the road to enjoy the view and take pictures. 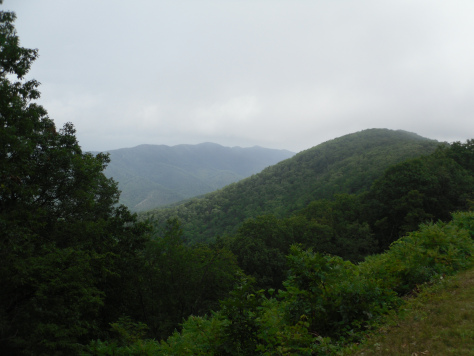 About 20 miles from the beginning of the Parkway, I began seeing some raindrops on the windshield and riders coming from the other direction had rain gear on.  I pulled over and put mine on before I got too wet.  It didn’t rain very hard, and thankfully, it was in the mid 70’s so it wasn’t cold or uncomfortable riding.  There were a few sections of the road where clouds almost completely obscured the road making it hard to see more than 30 feet in front of you.

I went about 125 miles on the Parkway before exiting near Roanoke, VA at around  2:00.  I was hungry and wanted to start heading towards Tennessee.  I got back on to I-81 and headed for Knoxville.

Thankfully, I still had my rain gear on because I rode through about 2 hours of light to moderate rain.  It was kind of frustrating because a few miles to my right I could see blue skies but to the left was rain.  As luck would have it, the edge of the rain followed the road for about 100 miles.  Every time it looked like I was headed for clear skies, the road would turn back into the rain.

The rain subsided as I neared Bristol TN at around 4:30.  I stopped for gas, took my rain gear off, and headed back out.  I had to stop one more time to put it back on because there was a ominous looking cloud up ahead.  As it turns out, that cloud didn’t produce any rain but later on, I rode through a stretch of highway that was quite wet.  While it didn’t actually rain on me, the road spray from cars and trucks made it seem like it was raining.

I stopped for gas again just past Knoxville.  Convinced that it wasn’t going to rain again, I once again took the rain gear off.  The remainder of the ride was actually quite pleasant with no more rain or wet roads.

I finished up in Cookville TN about 75 miles east of Nashville.  I stopped at a Super 8 motel and checked in only to find out my credit card was declined.  Since this happened last year, I knew what the problem was so I paid for the room with another card.  What happens is that the credit card company sees the card being used for multiple gas purchases across a number of states and it flags it for fraud.  Since this happened last year, I spoke with them Thursday morning before I left and told them that I was going to be travelling but apparently, that didn’t prevent the computer from automatically de-activating the card.  I called them and explained what was going on and they assured me that it won’t happen again.  We’ll see …