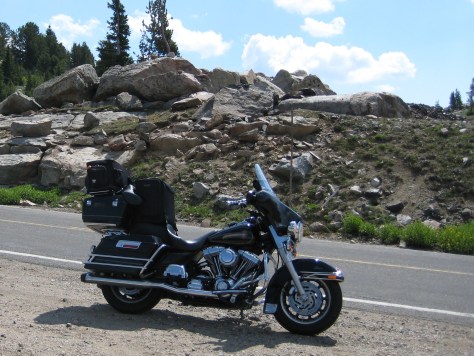 Sometime in April of 2006, after almost 20 years without riding, I decided it was time to start looking for a new motorcycle.  The last bike I had owned was a Yamaha XS400 that was sold when my son was born in 1986.

I had always wanted a Harley and in May of 2006, after looking at many other brands, I went ahead and bought my 2006 Harley Davidson Electra Glide Classic.  I had always liked big bikes, and I guess an Electra Glide is about as big as you can get.  I made the deal, signed all the paperwork and had my son drop me off at the dealer so that I could rid it home.

As the salesman was showing me all of the features of the bike, he asked me what I’ve been riding.  That’s when I told him that it had been about 20 years since I’d ridden a street bike.  A look of surprise and concern followed when I told him this.  He must have thought I was crazy for hopping on an 850 pound bike after not riding for so long.   He yelled to one of the other guys at the shop to “go around and get a Sportster for this guy to try out”.

I got on the Sportster, started it up and rode around the parking lot a couple of times to show them that I really could ride a bike.   Convinced that I knew how to ride and wasn’t going to kill myself before getting out of their parking lot, he handed over the keys to the new bike and I headed out onto the road.

As soon as I started riding down the road, I realized just how big and heavy this thing was and whether I had made a mistake in getting such a huge bike.  However, within a few files, I was reasonably comfortable riding it and knew that it was the perfect bike for me.  It took another month or so to gain confidence in slow speed maneuvering in parking lots.

Over the next year and a half, I rode as much as I could and started planning a trip to California.  I had always wanted to ride across the US on a motorcycle so in the summer of 2008, I loaded up the bike and headed West.  It was a trip that was everything I had imagined and then some.  As it turns out, it was the first of my now annual cross country motorcycle trips.

I rode the 2006 Harley to California again in 2009 before deciding it was time to “upgrade” to a 2010 Electra Glide Ultra Classic Limited.

I still have the 2006 Harley in my garage.  It’s got 68K miles on it without ever breaking down or leaking oil.  It’s a great bike.